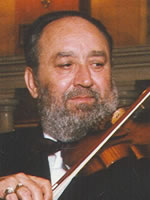 He was born on the 22nd of May, 1941 in Budapest, as a member of a musician family. His father was the conductor of the Bura Brothers orchestra in Oradea, for over 20 years. He started learning the violin at the age of seven from his father, later he studied at the Music School of Fazekas Grammar School. Back then, his father was conductor of the Rajkó Orchestra of KISZ Central Artist’ Orchestra.

He soon joined the band as well. He interrupted his high school education to become a member of the orchestra. From 1957 he became the principal violinist of the band. From 1960, he was a member of Hungarian Folk Ensemble, and from 1968 he became the principal violinist as well, until his death in 1997. He has been a founding member and artistic director since 1985, later vice president of the world famous 100-member Budapest Gypsy Orchestra. He travelled around the Globe from Australia to Japan, from China to the USA.

He created hundreds of adaptations of hungarian folk és gipsy songs, for example Ravel the Gipsy. He has worked on 40 disks and 2 stand-alone disks, and has made nearly 200 radio and television recordings. The japanese JVC has made 2 CDs with him in 1992. His honors: Youth Award in 1986, Order of Stars of the Hungarian Republic in 1991, Posthumus Liszt Ferenc Prize after his death in 1998. 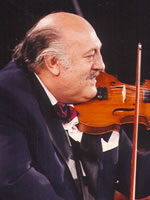 He was born on the 7th of January, 1925 in Budapest. He began to play the violin at the age of five from his father Géza Boros, who was an excellent musician. He also studied from the Primate King, Laci Rácz the 36th. From 1940 to 1942 he studied at the Academy of Music, from Ede Zatureczky. He founded his own band at the age of 17. In the later years he played at representative cafés and restaurants of Budapest. In 1950, László Gulyás art director asks him to be the principal violinist of the Hungarian State Folk Ensemble. The idea was supported by Zoltán Kodály as well.

From 1958 he was the principal violinist of the Hungarian Radio Folk Band. In the 1960s and 70s he plays in hungarian and foreign hotels and restaurants. Ha became the model role of the musicians in these times. Many of his students became dominant musicians of the hungarian gipsy music. Uncountable radio, TV and sound recordings are attached to his name. In 1972 he played at the Fisherman’s Restaurant, when he met the world-famous violinist, Yehudi Menuhin. Menuhin was fascinated by the music of Boros, and he invited him to play Brhams’s V. Hungarian Dance together.

In 1985 he was crowned as the King of the Primates, and becomes the vice president and principal violinist of the 100-member Gipsy Orchestra, that was founded that year. Referring to his health condition, he returned the band membership in 1998. During his career, he played music for kings, princes, ministers and many other celebrities. He received a Kossuth-prize on the 15th of March, 2006. Everlasting principal violinis, a Living Legend! Primate of the Kings, King of the Primes. 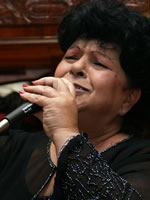 The crowned Queen of Gipsy music was born into a musician family, hes father played the dulcimer, her mother was a singer. For her mother’s encouragement in 1967, she applied to the Hungarian Radio’s talent contest. After the contest the radio made recordings with her. 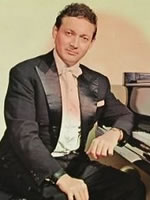 He was born in a hard-luck musician family and started his career at the age of 5 as a very talented boy. He was able to start the Academy of Music thanks to Ernő Dohnányi, but despite his talent, the “glorious” music world did not accepted him easily. In 1942 he was classified to be a soldier, and was installed only 3 years later when he again became virtuous musician of the budapest nights. He didn’t get any help from anyone.

Then he decided to try his luck abroad. In 1956 he performed in a concert in Vienna. He was soon invited tha France which became his second home. In 1966 he started the Festival de la Chaise Dieu (organ festival) and the biennial of youth in Versailles in 1968. He believed his talent was a gift of God. At the end of his life he received the Honorary Officer’s Degree in France. In 1993 he received the Central Cross of the Order of Merit of the Republic, in Hungary. He died on the 17th of January, 1994 and was buried in a tight family circle in Senlis.